There has always been a rumor among the public that the memory of those who read tombstones is weakened. On the contrary, I think one thing that strengthens memory is reading from a tombstone. In addition, I am one of those who believe that a person takes root in the ground where he buried a person, a piece of himself, his beloved. Even if this did not happen in the case of Abel and Cain. The one who said, “The one who is afraid of the graveyard does not die,” said this beautifully. People only take root in the land where they have buried their loved ones. Only then will they be there, even if they are not at all like the one there. When we die, we want to have an endless place, a permanent room, a stone next to our bed that we can run to and stand out when we’re bored. When we arrive, we want to lean our backs on that rock and take a deep breath. Wouldn’t we? When that day comes, we all go in together, after the gate of the cemetery everyone comes back, we stay. We may never know what the real home of the soul is, but we will know that the bodies that once proved our existence are out there somewhere. Even if it perished in the pit, in time it was lowered. We will always know, under a brow, as long as the world exists.

When you read a human, you read a tombstone. This has nothing to do with being a member of any religion. If they burn a person and turn him into a handful of ashes it is a necessity, they will surely erect a brow stone that will keep his name alive and bear his name. It is of no use to the deceased, it is a necessity for the living, the survivors. It’s all about having one’s emotional attachment, thoughts about existence and extinction. When you read a tombstone, you read a life story, how a period shaped a life. Graveyards are a place as the embodiment of emptiness, for existence that demands a response. There was a life, a story, that even turns into a verse for those who are waiting there, then he takes it and returns home not even knowing what he is looking for there. For example, a broken rose relief on a stone in an ancient sarcophagus made me sing these two lines for the first time:

I wish I had nothing else to do now, all day and even at night a flashlight in my hand, when I’m not hungry, thirsty or sleepy I’d wander around the old tombstones. Look what I want to devote my life to! It’s not just to enjoy old Ottoman Turkish, it’s artistically pleasing about why this thing called death is a civilization. It’s something that also contributes to people’s ideas about death. It is also a pleasure to taste and smell the history and to experience that atmosphere in terms of the varying periods of the tombstones and the periods in which the deceased lived. So I walked around Karacaahmet, lying on two different sides, step by step. This is how old tombstones entered my life. I’ve never been someone with an ideology when it comes to language. I don’t take seriously those who say, “We can’t read the tombstones of our ancestors.” Language is something you can always learn. Like Muallim Naci who learns French after the age of forty. Since each headstone is made by a different calligrapher, it is a writing system that will force even one who has learned Ottoman Turkish very well with its many writing styles and styles. Likewise, many of these ancient tombstones, which are religiously devoted, are the work of Greek and non-Muslim stone and relief masters, as are the architecture of the cities in which these tombstones are located. As I often say, death brings everyone together, don’t fight too hard not to come together.

Anyone can learn any language they want, if they want. No language that people want to learn has to be the official language of the state. Then that would not be learning anyway, it would be obligatory and condemned to it. Ottoman Turkish was never the native language of this geography. If it were, it would still be a language used at home, at least in a sense, like the languages ​​that are still banned today for many reasons or excuses. So no one should pretend that their native language has been taken away. Ottoman Turkish or Ottoman Turkish is one of the languages ​​against which extreme Republicans – I don’t understand that at all, because it’s ridiculous. On the other hand, I do not understand those who think that the official language of the state is Ottoman Turkish or Ottoman Turkish and that the Arabic alphabet is the same as an Islamic profile, and that they stick to their religious and political ideologies. Ottoman Turkish is a very artistic and diplomatic language that includes not only Arabic, but also Persian and Kurdish (indirectly from Persian). When you translate something from another language into another language, all languages ​​still say the same thing. I don’t know if it’s right to say “narrow-minded”, but knowing a language is a good thing. Even if this language is a language that has spread to our grave and tombstones with the acceptance of Islam. It is a misconception, which is why people should read old tombstones, it is doubtful whether there is a religious person under every tombstone written in Ottoman Turkish. Tombstones contain unique information about people from all walks of life. A clergyman’s forehead stone and a defector’s forehead stone were written in the same alphabet. Needless to say, it is not the alphabet on their foreheads that determines their worlds and their afterlife, but their taqwa. It is a crazy idea and claims that the majority of those who push for the Ottoman language do indeed think that the Ottoman language is a language that was killed by the alphabet revolution. Today, Literature, Turcology, Sociology, Theology, Arabic Language and Literature, Persian Language and Literature and History etc. It is a language in which these language classes are taught in the departments. There is nothing legal or social that prevents learning it. It is a language that even offers free courses when the number of students required to open a course even in an ordinary public education center is. That is why those who talk back, even when using current Turkish, which is one of the most advanced languages ​​in the world, is not so important to Ottoman. It would make more sense for them to learn and then make claims.

Today’s headstones are both ugly and a product of the simplification of how terrible death is. If you go to cemeteries these days, you can understand how faithful the living are to the dead from the state of the cemeteries. It is not very important who the deceased is, but it is possible to see the treatment of one person to another after death. When he sees another neglected grave next to well-maintained, flowery, lavish tombs, he may find himself thinking about a person’s fate. He shudders as if facing the other side of death, his face made of true darkness and loneliness. Tombstones, however, are evidence that humans once lived. It must not become idolatrous, nor must it be trampled upon. Mandatory or voluntary, it deserves respect. Many books have been compiled and written about ancient tombstones. Enthusiastic and giving information about stones to those who have difficulty learning Ottoman Turkish or Ottoman Turkish but want to read old tombstones. But first I have to make this criticism. Today, there are still old tombstones, including new tombstones. I advise those who throw themselves on the ground first to protect the cemeteries from unwarranted and looting acts like treasure hunting, or to respect the history and people that once existed before mowing the old graves in the place where they want to bury their relatives, based on their position in society, such as their father’s garden. says a song: “This world is neither for you nor for me / Sultan Süleyman did not / There would be no such book written.”

In the research book titled “Secrets of Ottoman Tombstones” Fatih sergeant In addition to providing detailed and heartbreaking information on ancient tombstones with his own photo shoots and miniature paintings, he also documents a lot of literary, architectural and diplomatic information. I can easily say that his memory is not weakened by reading the tombstone, on the contrary, he has a stronger memory – as I said at the beginning of the article. In classifying the ancient tombstones, I would like to underline that these and similar books are very important for recording information about the past and past periods, from the shapes of the stones to the way they are embossed, the style of calligraphy, the architectural and artistic environment of the neighborhoods they are located within the boundaries of the cemeteries and sociology. Such books are not the product of an ideology, but contain important elements of real history and archaeology. If it’s not in language, even if it’s not in religion, it’s an indicator of how everyday life, which progresses as a civilization where a common culture comes together, reflects on death and on human life. It is the way that nothing can be found in the context of being racist, nationalist or ultra-religious in this area, but on the contrary, it is the way that the adventure of man and life throughout human history encompasses what will emerge as the world is lit up again, as if a light went out when it was all over. “El-hattu bâkî ve’l-life mortal” (writing is permanent, life is temporary) is part of the truth. It is also the version of the role of old or new tombstones in the invention of writing, starting with stone tablets and continuing today with forehead stones. Whatever you do, sometimes it always goes back to the beginning, like a game of fate. Perhaps humanity does not evolve at all as it progresses, except changing shape and dimension. 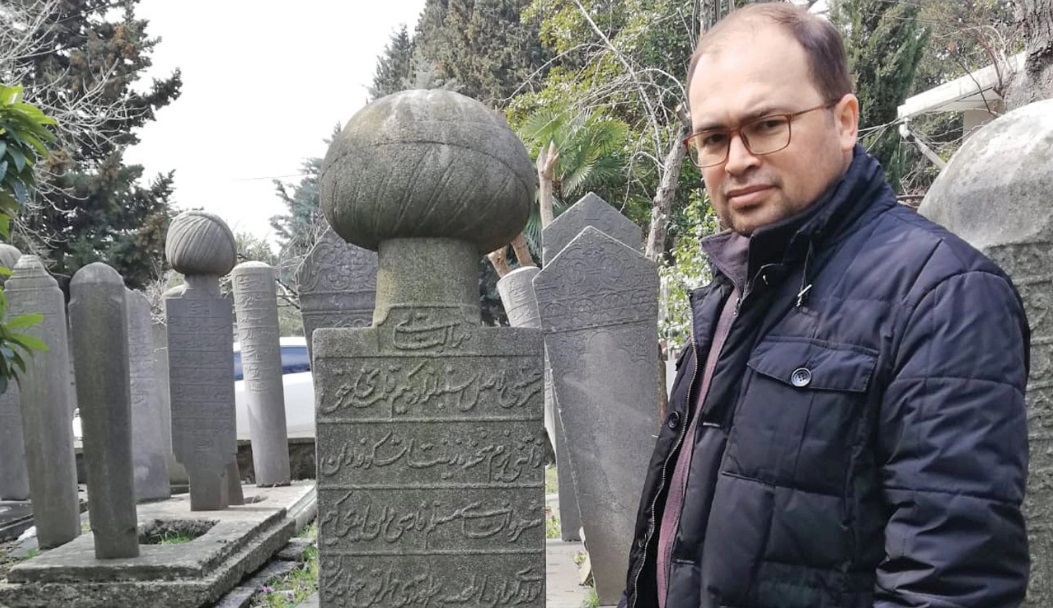 Fatih Sergeant is simply a “literature teacher” in his own words. He did not remain one who only taught Ottoman Turkish or Ottoman Turkish, which he learned through his education, and limited it to the limits of his profession. He also acted as a translator for the cemeteries we passed every day. Besides the very sad stories, I am sure that on some tombstones he has come across texts that will make people smile, and more importantly, the lost grave of Sümbülzade Vehbi, whose execution has come up many times because of some poems he wrote , for example, a poet of couch poetry and a judge of a period, is also buried. An educational writer who found the stone while reading and researching. With this book and his works on the subject, he recalled how valuable the Ottoman Turkish language is in terms of culture and grace, rather than the fear caused by tombstones and death, and of course in this context he also served a sense of enthusiasm and would give excitement to those who want to learn Ottoman Turkish. When we talk about tombstones, people may think we are talking about a person who takes care of the dead. This is a service to the living, not the dead. For history, art and literature are not meaningful acts for the dead, but for those who are still alive.